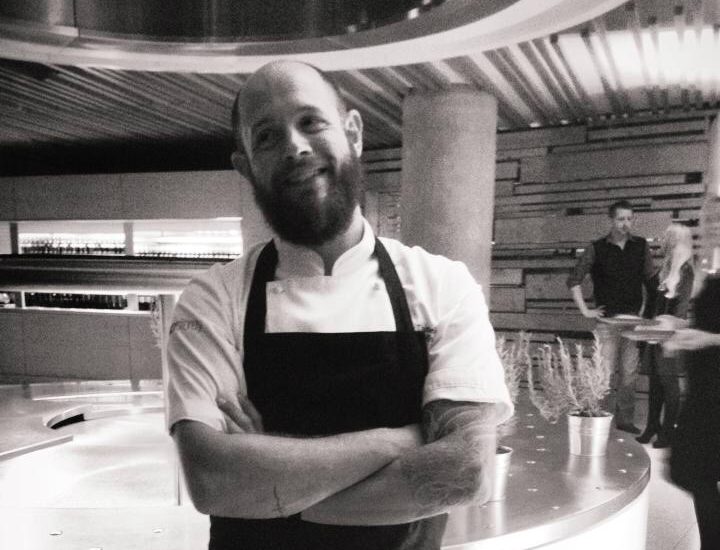 Getting to know you: Adam Daniels

Adam Daniels, our new executive head chef at One Moorgate Place, is bringing about the changes to our menus and we’re hearing great things so we thought it was high time we introduce him on the blog!

What did you do before coming to One Moorgate Place?

Well I left school at 17 after working in kitchens as a porter. I was captivated by the creativity and enthusiasm born out of the kitchen. Since then I have won the Gordon Ramsay scholarship award, taught in Birmingham and Barbados and has previously been head chef at the restaurant Blixen in Spitelfield Market. I have also created a pop-up restaurant which served 2000 covers in the middle of a field at Latitude festival for 3 years running. I also did a bit of travelling in South American and most recently I worked as a freelance consultant for restaurants in London.

What made you decide to become a chef?
Well I started as a kitchen porter in a seafood restaurant, I soon realised I was spending more time at work than I was at school, so left school and followed my passion. It has never been about the salary for me but about the food and artistic expression.

What would you like to bring to One Moorgate Place as Executive Head Chef?
I like to think I’m bringing some new culinary knowledge from my experience in other places. And I have a thirst for efficiency, what can we do that is better and how can we respond to change faster? I suppose I’d like to push the norm, accountants are seen to be risk adverse but it doesn’t mean that their building’s food has to be, we can push the boundaries!

What does a day in One Moorgate Place look like?
Well, it obviously depends on how many events we have on. On busy days I am much more hands on in the kitchen helping the team to deliver but on more quiet days it gives me a chance to liaise with the Front of House team, the café staff and the people I work with outside of the kitchen. I also spend most mornings working with suppliers to ensure we deliver our food using the best ingredients and I also test new recipes.

What would your menu to impress look like?
This is really hard because it’s always changing. My only steadfast is an Apple tart tartin for dessert. I would probably pick fish as a main course because I love working with fish. And for starter? Well I’ve been testing recipes incorporating Dashi recently and I like the idea of bacon infused Dashi, so let’s go with that.

What would be your go to midweek meal?
Swedish Falukov which is sausage with mash and lingonberries. The lingonberries are picked whenever my wife and I are in Sweden and frozen, and the potatoes for the mash come from my own crop which I harvest three to four times a year.

What food can you not stand?
Liquorice, I have no elaborate explanation behind it, it’s just horrible.

What food trend makes you roll your eyes?
I’m over burgers, there are far too many burger restaurants, there is only so much you can do with a burger. Oh and in a similar vein, vegetarian food that is made to masquerade as meat.